From the boats to the Pampas:

History of the Jews in Argentina 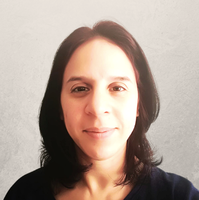 The presence of Jews in Argentina goes back to the expulsion from Spain. In the late 19th century, masses of Ashkenazi immigrants fleeing Russia and Eastern Europe settled the country, becoming one of the largest Jewish communities in the world. Despite waves of antisemitism, xenophobia and terrorism, Jews have become fully integrated in most sectors of the society.

We will travel with the different groups that came to Argentina, with emphasis on my own family - the story of my Sephardic grandparents who were born in Argentina and of my Polish grandparents who escaped Poland between the two World Wars.

Through vivid images and incredible tales, we will explore the special mixture of cultures in which generations of Argentinian Jews have grown up, so you can get up close and learn a small piece of this history.

Cecilia Cohen was born in Argentina and has lived in Israel with her family for the last eighteen years. Today she is Director of the Latin America Desk of Marom Olami (organization of young adults of the Conservative Movement) and guide at the Yad Vashem Museum in Jerusalem.

She also runs an annual Jewish Youth Program for Latin Americans in Israel. She studied Education and History of Art at the Hebrew University of Jerusalem and worked for four years in the Associação Religiosa Israelita Jewish community (ARI) in Rio de Janeiro, Brazil, in the area of Jewish education.

Today she is training to become an official Israeli tour guide. Her great passion is Jewish education and she dedicates her time to studying the History of the Jewish people and transmitting it to the younger generations.

10% of the profits will be donated to the Museum of the Jewish Colonies in Villa Dominguez. This center is dedicated to the preservation and exhibition of the rich material and documental testimony of the Jewish agricultural colonies founded by Baron Maurice de Hirsch through his Jewish Colonization Association in the Argentinian province of Entre Ríos, in which thousands of Russian Jews settled between the late XIX and early XX centuries.