Marc Chagall, bringing Jewish Belarus to the forefront of art and culture

Did you know that Marc Chagall, arguably the defining Jewish voice of the 20th century art world, was born in Belarus? 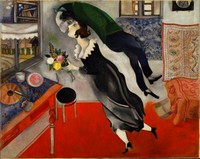 Bella Rosenfeld depicted in The Birthday, 1915

Marc Chagall made strides across Russia, France (where he spent most of his life), Israel and the USA. But he was actually born in Vitebsk, Belarus. At the time it had a Jewish community of over 30,000 Jews, making up over half the population, although most of the city's Jews would tragically perish in the Vitebsk Ghetto massacre in October 1941 at the hands of the Nazis.

Chagall was born as Moishe Shagal into a deeply religious Hasidic Jewish family in 1887, one of nine children. Though not poor, they lived in modest conditions; his father worked in a herring workhouse and his mother ran a local shop. Growing up, he went to a Jewish heder before attending the Russian-speaking local public school, unusual for Jewish children at the time - the headmaster was bribed into accepting him. There he learnt drawing basics but expressed a desire to go to art school. Undeterred by the ban on Jewish students at art schools and his mother's scepticism, Chagall sought out Yehuda Pen, a local Jewish realist artist who operated a drawing school in Vitebsk and who offered him free classes.

Chagall soon left the school, craving more artistic freedom, and moved to St Petersburg to study art for the next few years, immersing himself in experimental theatre and art. From there he moved to Paris and further developed his distinct and idiosyncratic fusion of styles.

As years passed and he moved between Vitebsk (where he returned to meet his first wife, future muse and love of his life, Bella Rosenfeld), Moscow and back to France, he became an artist of international acclaim, famed for his pioneering modernist, surrealist works both dreamy and colourful. His art adorns important buildings from the Israeli Knesset to the ceiling of the Paris Opéra, and his stained-glass windows open onto the United Nations and beautiful cathedrals and synagogues worldwide.

The Jerusalem Windows, at the Hadassah Hospital medical centre 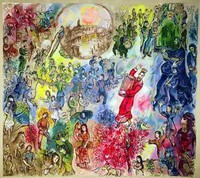 One of three tapestries in the Israeli Knesset

But despite his success and cosmopolitan secular lifestyle, memories of his childhood never left him. Judaism served as a continued stimulus for creativity and imagination. Chagall himself said that "if I were not a Jew.... I wouldn't have been an artist... I would be a different artist altogether." His art is full of recurring motifs stemming from his childhood experience and innate Jewishness.

His works contain floating Jewish figures, biblical imagery and a host of religious symbols. Fish motifs are a common reference to his father's job, combined with snowy streets, fiddlers, goats, wooden houses; all remnants of his childhood Vitebsk. Even from Paris, where he created the majority of these works, his roots consistently resurfaced in his art. The dreamlike nature of his art amplifies his sense of longing and is testament to the fact that he painted through memory. 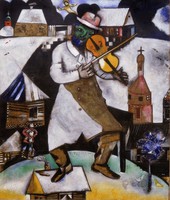 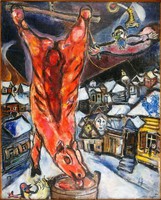 His childhood made a deep imprint on him both positively, as seen through his Jewish pride, and negatively, marked by suffering, war and exile. He lived through a number of pogroms and much discrimination for being a Jew, noting that "I felt at every step that I was a Jew-people made me feel it."

Yet even his depictions of Jesus made sure to emphasise his very Jewishness, with images of Jesus draped in a tallit or surrounded by menorahs or Torah scrolls. 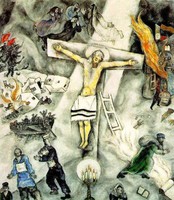 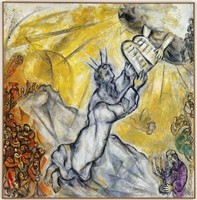 Moses Receiving the Tablets of Law, 1966

He was commissioned to illustrate the Hebrew Bible and travelled to Tel Aviv for several months in 1931 to gain inspiration. He reported that the Holy Land gave him the "most vivid impression he had ever received" and he completed the monumental project by 1956, consolidating his status as one of the most eminent Jewish artists of our time. Through his art, Chagall resuscitated and preserved an Eastern European Jewish tradition which no longer existed but for his memories, sharing with the world his vision of the old-world shtetl and bringing the Jewish community of Belarus to the forefront of art and culture.