From Ethiopia to Israel:

My Story, Our Journey 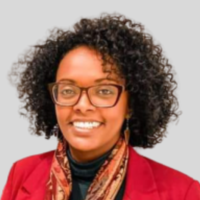 The Beta Israel, also known as Ethiopian Jews, lived for centuries in northern and northwestern Ethiopia, in more than 500 small villages spread over a wide territory. During the 19th and 20th centuries they suffered religious persecution. The Beta Israel made contact with other Jewish communities in the later 20th century, and most of the community immigrated to Israel. In this session we will embark on a journey from Ethiopia to Israel and learn about the Jewish Ethiopian community's way of life, traditions and reality. By engaging through a personal Aliyah story, we will learn about the identity, strengths, and activism of the community and their effort to realize the dream of reaching Jerusalem. We will also talk about the reality of life in Israel for the grandparents and parents' generation and for the second generation of Israeli- Ethiopians.

Zehava Tesfay was born and raised in southern Israel to a family that had made Aliyah from Ethiopia in 1980 by journeying through Sudan. She earned a BA in Education, Sociology and Anthropology as well as an MA in Nonprofit and Community Organization Management, both from Hebrew University. She is also a graduate of the Maoz Municipal Leadership Program offered by Israel's Ministry of the Interior. Zehava came to New York to serve as a Jewish Agency emissary, and leads the delegation of Shlichim serving in the UJA-Federation of New York Shlichut Initiative. Previous to this role, Zehava was the Director of the Programs Department at the International Fellowship of Christians and Jews, where she had previously managed a youth development program for communities in Israel's periphery. She also has professional experience as the Manager of the Migrant Worker Division of JDC's Center for International Migration and Integration.

10% of the profits will be donated to the Association of Ethiopian Jews (IAEJ), Israel's premier Ethiopian Israeli-led organization, advocating for an equal and just society. Founded in 1993, AEJ advances equitable policies to close gaps, change prevailing attitudes and improve the quality of life of Israelis of Ethiopian descent on every level.